In this post we’ll dive into the technical details of how one can expose data in an iRODS zone as S3 object storage.
What is Minio? – https://minio.io/
Minio is an open source object storage server with Amazon S3 compatible API. Build cloud-native applications portable across all major public and private clouds.
What is iRODS? – https://irods.org/
The integrated Rule-Oriented Data System (iRODS) is open source data management software used by research organizations and government agencies worldwide. iRODS is released as a production-level distribution aimed at deployment in mission critical environments. It virtualizes data storage resources, so users can take control of their data, regardless of where and on what device the data is stored. As data volumes grow and data services become more complex, iRODS is serving an increasingly important role in data management.
The development infrastructure supports exhaustive testing on supported platforms; plugin support for microservices, storage resources, authentication mechanisms, network protocols, rule engines, new API endpoints, and databases; and extensive documentation, training, and support services. 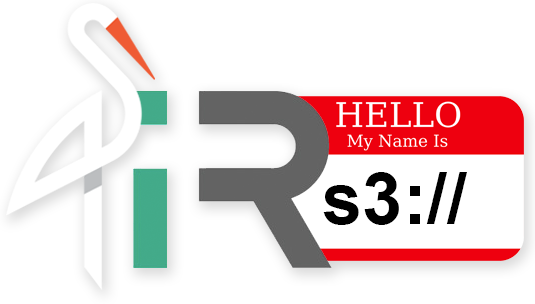 Every day new cloud-native scientific applications are being developed and deployed. These applications leverage the cloud’s infinite scalability, rapid development & deployment cycles, and reduced costs. Cloud computing is becoming ubiquitous across research environments everywhere. Naturally, developers are moving from old school POSIX type storage to cloud-based object storage hosted at AWS, Azure and GCP. Cloud native developers are beginning to utilize these object storage services combined with cluster-computing / big data tools like Apache Spark, Hive, Presto, and AWS Athena to extract meaningful information from raw datasets.
Minio provides a cloud-agnostic object storage layer for these applications. It creates an abstraction for uniform access to object storage, with support for multiple back end clouds. With Minio, a developer doesn’t have to choose between cloud specific APIs/SDKs for AWS, Azure, or GCP. They can write their application once (targeting s3:// specifically) and maintain uniform, repeatable deployments across public and private clouds.
However, sometimes the cost of migrating your datasets and applications to the cloud is prohibitively expensive, or your organization’s data management policies don’t allow it. In these cases, iRODS has been the choice of many research institutions as their on-prem data management and virtualization framework. It’s performance, highly modular architecture, and open-source approach to development provides the foundational toolkit required for managing massive datasets. So, how can a developer leverage the modern cloud computing ecosystem and development best-practices, while their data is stored in iRODS?
BioTeam has been working on a software prototype that allows users to expose their iRODS zone over the S3 protocol utilizing the Minio project. This technology bridges the gap between cloud-native applications and your data stored in iRODS. Now any modern S3 aware application can utilize iRODS data as if it was S3 cloud object storage. We’re calling this technology Minio iRODS Gateway. Here’s a sneak peek of what the usage of this technology would look like when built as a Docker container named minio-irods-gateway:

Here’s a screenshot of the resulting Minio web interface, serving on port 9000: 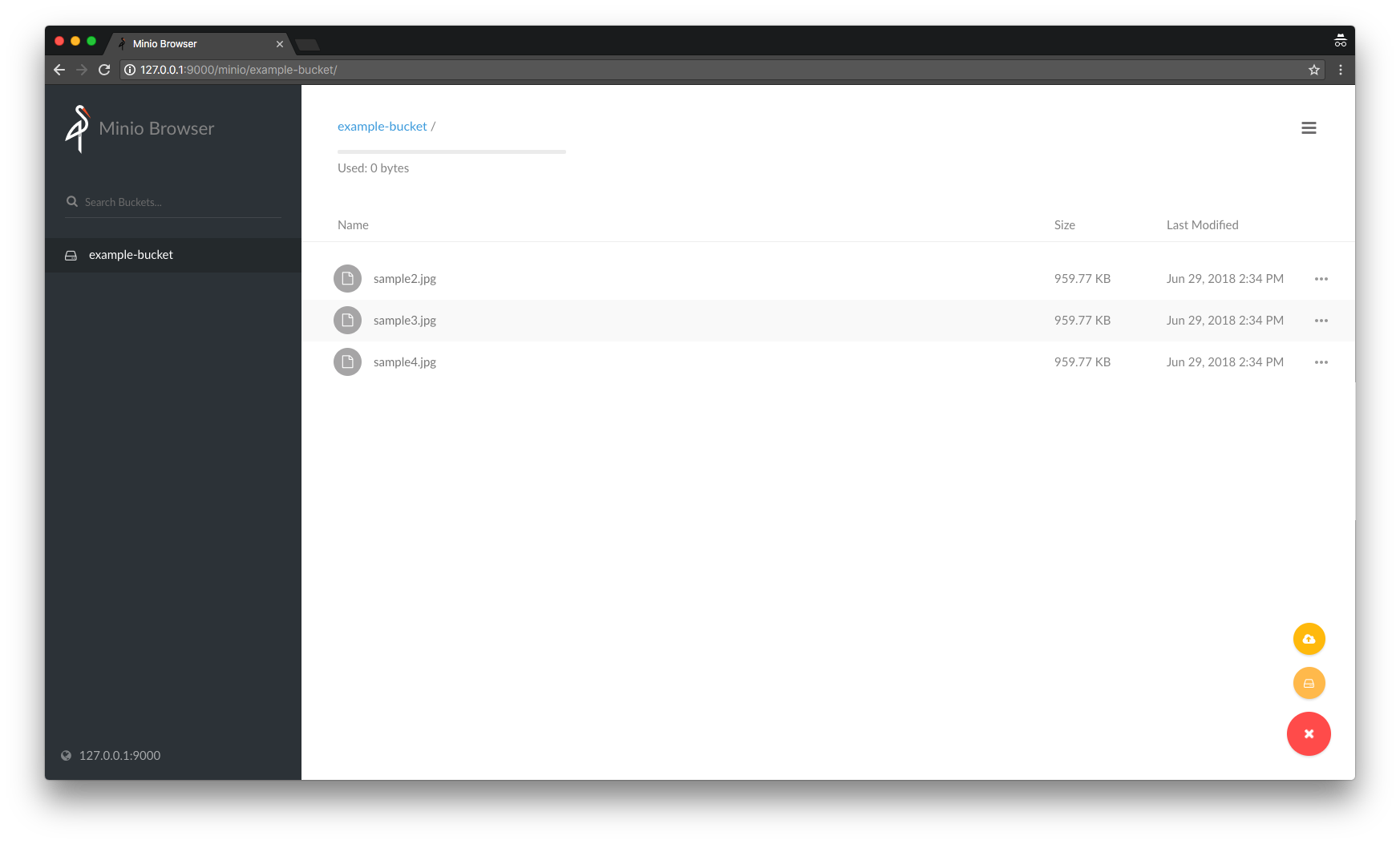 You can see the data objects as they exist in iRODS (utilizing ils icommand):

And finally a listing of objects with the Minio client mc:

So how does Minio iRODS Gateway get the job done? Let jump into the technical details!

One of the major differences between iRODS and S3 object storage is the concept of a folder or directory hierarchy. iRODS replicates POSIX directory functionality with internal objects called collections. iRODS collections can be thought of as uber-directories. You have a ‘working collection’ which can be changed, and data objects exist within this collection hierarchy. Collections can also be assigned metadata and access control lists, which are powerful features when leveraged optimally. Users of iRODS can find data objects and collections via hierarchy traversal or metadata search.
In contrast, S3 object storage does not implement the concept of directories or collections. However, the object ‘key’ or ‘name’ can contain forward slashes, which, when combined with the ‘delimiter’ and ‘prefix’ request parameters, can effectively filter results sets and mimic directory traversal.
Given this list of object keys:

You can utilize this set of parameters to mimic directory traversal:

So how does the Minio iRODS Gateway reconcile these differences in object organization strategy? Given the set of object keys (names) above, here’s how the data is stored in iRODS:

The object keys (names) are stored in the metadata value field varchar(2700) since data_name is limited to varchar(1000), while S3 requires at least 1024 characters. Storing the MD5 hash of the object’s key allows us to reference the object via exact key while not overflowing the data_name field. The bucket name is included in the minio_obj metadata value field to allow for simpler SQL queries when implementing ObjectLayer.ListObjects().
Multipart upload data parts are stored as iRODS data objects within the multiparts/ sub collection. The data object name is an md5 hash of the multipart object’s key, suffixed with the part_id. Each part is assigned metadata to annotate the upload_id to which it belongs. The upload metadata is stored as a JSON object in the top-level bucket collection, named after the upload_id and md5(object_key).

Now let’s jump into the details of how this iRODS back end is written. There are two Minio interfaces that need to be implemented:

The gateway interface is pretty simple. The Name() method should respond with the name of your gateway, for example “irods”, Production() denotes whether or not the gateway is ready for production usage. Finally, NewGatewayLayer() is passed credentials and is expected to return a type that implements minio.ObjectLayer.
Source:
https://github.com/minio/minio/blob/4f73fd94878b087b428ccbd309463f956be8dff7/cmd/gateway-router.go#L27

The ObjectLayer is where the magic happens. It includes all of the functionality for creating/listing/deleting/managing buckets and objects. This is where we write code that tells Minio how to interact with iRODS as a back end. Luckily not all of these methods have to be implemented, thanks to the use of golang’s embedded structs. Our gateway implementation can inherit from minio.GatewayUnsupported, which provides the method stubs required to suppress pesky compile errors and fulfill the requirements of minio.ObjectLayer.
Source:
https://github.com/minio/minio/blob/0d521260237ca69a89044f23f10a13b44e1f53c9/cmd/object-api-interface.go#L30

Here’s an implementation of ObjectLayer.PutObject which shows how easily GoRODS was shimmed in:

And the implementation of ObjectLayer.DeleteObject for the curious:

We hope you found this topic interesting! If you have any questions about iRODS or S3, we’d love to get in touch with you. Just send an email to info@bioteam.net.